I planned some posts about Obama’s unmanned drones, how Updike made adulthood seem so lousy to me as an adolescent, why I feel embarrassed for Michael Steele, and how in just four days, Facebook has decimated my productivity (Scrabble anyone? No really: ANYONE?).

Maybe later. The fam is at a puppet show this morning, affording me a rare chance to listen to whatever I want.

> The Wedding Present – Crushed
Kev lent me his cassette version of Bizarro, my formative and still favorite WP album. Bitterness with a ferocious beat. Picture me jamming up and down Hiawatha.

> Mission of Burma – Academy Fight Song
The eponymous collection of MOB’s first EP and album connects all the dots for me: what Wire wrought, where Yo La Tengo picked up, how arty doesn’t have to mean self-conscious.

> Jason Lowenstein – Circles
Even avid Sebadoh fans (I’m one) ignored the bassist’s solo album when it popped up in 2002. I got my late reward in the dollar bin at Cheapo last week. Imagine 10 solid Lowenstein tunes a la “Bakesale” and “Bubble & Scrape” not intercut with Lou Barlow’s sniveling.

> Sleater-Kinney – Wilderness
I remember the angry letter S-K posted when this album leaked in ’05. They were right to feel so righteously wronged: it’s spilling over with heart—and pummeling, dissonant guitar, which I love.

> A Certain Ratio – Do the Du
The Hosmer Library in Minneapolis is some renegade musicologist’s pet project. The shelves are clogged with CD rarities in every genre like this collection of ACR early tracks. They pioneered all the tricks !!! and Rapture copped later.

My grandmother died a month ago in a hospice room at the Gutterberg, Iowa, nursing home where she’d been living for two years. When I heard she had stopped drinking or eating, I didn’t expect I would be there for the end. But with some light encouragement, I found myself with my mother, grandfather and sister talking, looking at pictures and and having cocktails around a hospital bed for her final hours. She went gently and, it seemed to me, with the same instinct for what’s sensible and proper that she always had before her slow mental and physical decline over the last seven years.

She died early on a Saturday morning. I wrote her obituary in the customary style before heading downtown with Gramps to finalize the arrangements (cremation, no service) and share some prime rib at a restaurant overlooking the Mississippi River.

Her good life ended with a good death. Among the many things I’m glad about, I’m happy it didn’t come too soon for Grandma to meet Johanna, whose middle name, Audrey, belonged to her mother, my great-grandmother. 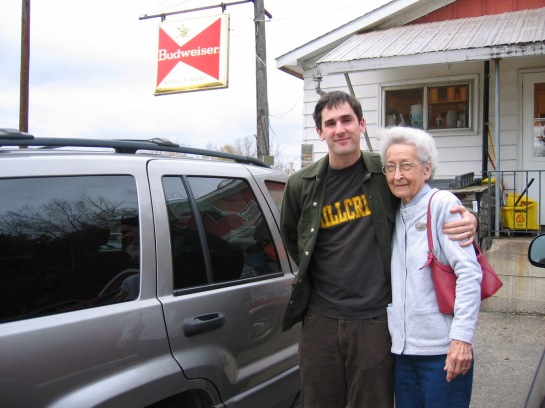 This blog is not yet 24-hours old, but yes, I’m already posting a YouTube from a Japanese game show.