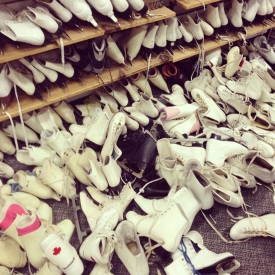 I WAS PARTY TO AN ARGUMENT this week about New Year’s self improvement. It was on the Internet, where cynics and contrarians are way overrepresented. They said our good intentions are mostly in vain when we choose to change at such an arbitrary time. Resolutions have to spring from profound crisis, they said, from needs that heed no calendar.

I hear that. I’ve bailed on my share of January fitness kicks and penned lists in the holiday afterglow that seem absurdly pie-in-the-sky a few days later.

But I’m fine making a date with renewal (no crisis, please). The moment isn’t so arbitrary. Winter Solstice is a turning point for every culture outside of the tropics, occurring, not by coincidence, right around New Years. And the cynics seem to miss the social component of intention: it gains force when everybody has it.

At the risk of going all “positive vibes” and “the universe has ears” on you, the moment feels fortuitous. After 3 months of acute self-absorption in New House Land, I feel sparks of genuine interest. Colleagues are writing me into proposals for worthwhile work. Make Sh!t is poised to revolutionize mini golf. I’m using the hell out of some second-hand ice skates, the direct result of a Christmas visit from my brother-in-law (passion transmission in action!).

Then there’s the Book. I’m hesitant to say anything about it because my hopes are embarrassingly high. It’s all very preliminary, except that amazing arch amigo Steve Davis has in his spare time written a history tome (no effing around) about his hero John Brown, Abolitionists and the Underground Railroad in Iowa, which he researched by visiting county historical societies and cemeteries from Council Bluffs to Burlington. I’m doing maps, illustrations and production (my bit’s starting to take shape on Google).

I’m positive this book will make my year. And I haven’t even read it yet.

>> Pslam One – Better Than My Last