IN A RAPIDLY WARMING, PETROLEUM-SCARCE WORLD, long-haul road trips may no longer be defensible. But weighing our waste against the lure of a righteous mountain cabin just outside Yellowstone, we said Screw It and got in the van. Having only driven around it before, I worried the Park wouldn’t live up to the hype. Was it just the darling of people who’d never gone elsewhere (my strong suspicion about all Disney Resort-lovers)? Would it pale next to the postcards?

No. Yellowstone proved to be a steaming smorgasbord of vividly bizarre wonders. It’s one of the few times where conventional wisdom knew what was good for me.

Our ride was deluxe, a big honkin’ GM van worthy of my weirdest uncle circa 1980. Six bucket seats. CD/DVD/cassette. Lingering scent of industrial solvent. 1,100 miles flew by, at least up front in the Dad Cab. 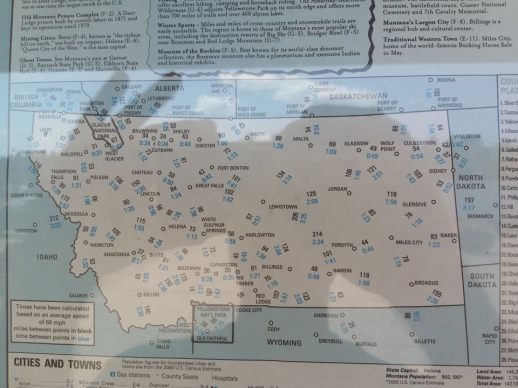 We spent a night in western North Dakota, land of fracking fortunes, gargantuan pickups and shockingly overpriced Days Inns. Then a final 600-mile haul through Montana, which looks like this when the maps bleach out. 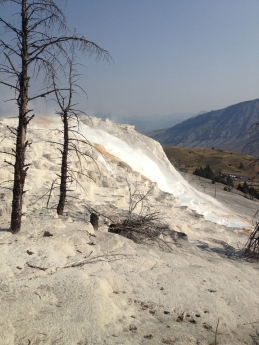 The park’s surreal chromatics come from heat-seeking bacteria that cluster along thermal springs according to their temperature (above and below). Did that sound convincing? Because I have no idea what I’m talking about. It might as well be made of Jell-O. Click for a better view. 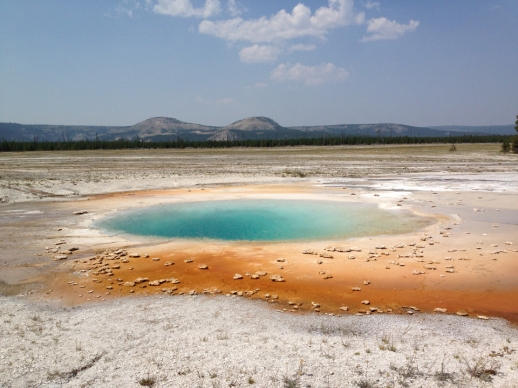 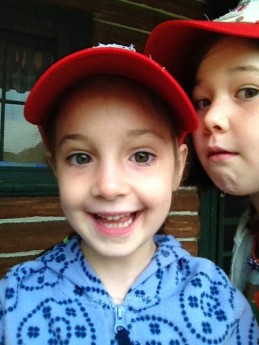 Jo Jo posing elegantly on the Yellowstone River; Her and Isobel in matching Harajuku Mini meshcaps. These two built dams, rode horses, braved whitewater and went all Frontierswomen for a week (we oldsters honed our Picnicking and Wine Guzzling skillz).

So Old Faithful? People go bonkers for that. Intent on capturing all its glory, this dude butted to the front of the crowd with his iPad aloft. It’s like 68°. Where’s your shirt?

Jenney and Sarah hike above the Grand Canyon of the Yellowstone (right). Our crew had some unique flair too, no? 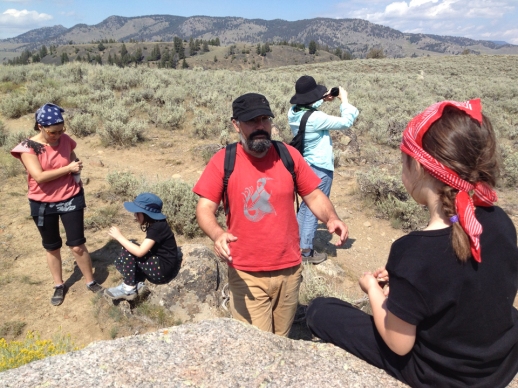 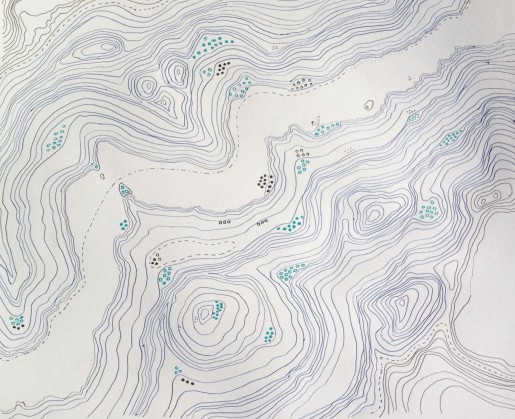 An invented topographic landscape, from a series of romantic moonlit drawing sessions Lucas and I did after everybody else crashed.

Me on Boulder. This field was littered with gnawed-on bones and other wildlife traces, though animals in the flesh were scarce. They smell you coming.

Sarah’s cross-stitch parting gift to the Lazy M cabin (left). I knew we’d enjoy the stargazing deck and full kitchen, but the hair salon was a nice surprise.

Hiking the miles of empty ranchland around the Lazy M, Lucas and I ducked into an old homestead abandoned for decades (right). After experiencing the century’s-worth of tourist infrastructure around Yellowstone, I’m reassured by places that may stay wild and neglected forever.

Big thanks to Jenney, Lucas, and his big-hearted patron Emily for sharing all this splendor. I’d say we’ll return the favor, but who would ever loan me something that good?

“FRONT LOAD THE PAIN.”
“The dudes you remember are now coaches.”
“Every zoo is a petting zoo as long as you’re not a wuss.”
“Two trees French kissing for eternity.”
“Does it rain in space?”
“Parents are supposed to hate their kids’ music. It’s the circle of life.”
“AM pop as Arch Deviance” (noted stageside at Ariel Pink).

Mission of Burma live in 2012 (per one YouTube commenter: “old people kicking your ass.”)

Archers of Loaf showed and proved to a roomful of almost-40-year-old once-punks. I bought tickets for the wrong night but the 400 Bar let me in; I’ll hold off trash-talking that club for a while.

The Heavy Cali Boogie of DAM-FUNK.

“Deliberately contrarian ardor for the worst of the past.”
“Competence is sexy.”