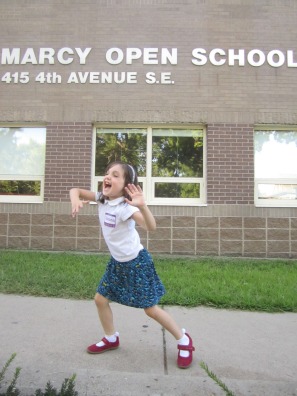 A MONTH AGO, MY FIRST MOMENTOUS INEVITABILITY as a parent came to pass. Johanna’s arrival in Kindergarten was a triumph. How was there any doubt? It seems obvious now, though we sweated it plenty (a symptom of the over-protective culture that defines me, much as I resist). As the youngest in her class, I’d half expected Johanna to run away screaming, if not burst into flames. Instead she blew me a kiss and started running the place.

For the first time since Johanna came along, I’m seeing her experiences through the lens of my own. I remember Day 1: walking past the crossing guards, taking seats on the colored tape, napping on a towel, meeting a boy named Carnell in his Aquaman Underoos.

Jo invited some new classmates to her 5th birthday party. I had the uncanny feeling not only that I knew them—the silent girl who draws well, the redheaded wild child—but that I would now know them forever. Their faces were lines connecting 30 years before and 30 years hence.

Something similar happened when I met their parents. It’s like by joining the school, we adults are suddenly on a team, knit together by the noisy, beautiful, tantrum-throwing things we care about most. These people want to like you. They are grateful for your effort. Your victories are theirs and vice-versa. Maybe others get this reception in their workplace or church. I wouldn’t know.

The school is in Northeast Minneapolis, an unbusable distance from us. True, I’m refueling my car more often. But the drive is almost absurdly scenic—five rolling miles of Mississippi River I share with rowers, runners and barges. Maybe I’ll buy Jo carbon offsets for her 6th birthday.

Back at home, there’s a palpable sense of relief. That Jo’s happy. That we made a smart decision. And that maybe we’re done with such decisions for a while.