NOTHING LIKE A FEW DAYS IN A HOSPITALITY ROOM with a bunch of 90 year olds to make you feel young again. I had my ass handed to me in cribbage by a lady who was nearly blind. I mixed Black Velvet-and-Gingers for men who require great effort to stand. I joined in a tone-deaf karaoke rendition of “We Are the World” with a small crowd of warbling Marine wives, which I promise sounded worse than you imagine.

You know you want on this party bus.

Rewind to the fourth of our six recent trips, late-August in Oregon. Why were we there again? What happened? The pictures should help.

Sarah and Jo flew out before me. Within a day I was in psycho-bachelor mode: a lunch of raw peppers and stale pastries with sugar.

Sticking around meant I could go to Witt’s Change of Life party. He’s going back to school, switching careers, and having a baby. So we showed support by letting him cook us dinner and get us drunk.

Later that night at the Red Stag, somebody sang “Total Eclipse of the Heart” from the floor. I laughed uncontrollably, which doesn’t happen enough.

I arrived in Portland to find Sarah and Jo dying to leave. We hightailed it to low-key Manzanita for a beach day. Johanna rolls her own.

From Highway 101, a steep hike through old growth leads you to a sweet secluded beach.

Things eventually burned off and brightened up, our moods included.

Jo befriended a mermaid near the tidal caves.

I tried to take a nap in here. No dice.

My one wildlife sighting.

If you can tolerate lactose, you gotta do ice cream at the beach. I had a beer.

On to McMinneville to celebrate friends Sheila and Dan’s nuptials (they were married on 1/1/10, but saved the party ’til now). Our refurbished old hotel had spectral portraits of historic patrons on the walls.

The party was held in a Frank Lloyd Wright dwelling 50 miles away in Silverton (we weren’t in any one place more than a day). The entertainment included belly dancing and sword balancing. Ah, Oregon.

The coloring table, my preferred refuge from small talk.

I’M CAUGHT UP IN AN EMAIL MARATHON with my high school friends, trading japes over a week of sprawling reply-alls (only children of the 90s could misuse email like this; the overlapping call and response is awkward even when you’re glued to your inbox; no doubt kids today reject the mess and lag—too busy sexting).

The subject, nominally, is Can old bros manage to meet up—and rekindle the freaky magic of our clique circa 1992?

The conclusion, sadly, is No. Blame the babies, pre- and post-born, the scarcity of vacation days, diverging ideas of what makes for a good time. As usj, some West Coasters can’t see outside their own time zone. Somebody mentioned a date in summer 2012. I laugh thinking how unfathomable such advanced planning would’ve seemed to us at 18.

Before things deflated (dismissive digs about visiting me at the Mall of America? That’s low), there was this inspired diatribe by Steve Davis, who needs to start blogging again:

[The mainstream triumph of independent music in the vein of Fugazi] never happened, thanks to what Rage Against the Machine started and Limp Bizkit firmly ended with a moronic display of pyrotechnic “catharsis” at an already superfluous anniversary of Woodstock, having celebrated just 5 years earlier in a blatant display of monetary avarice and phony nostalgia for a generation who knew as much about demonstratiing and revolution as the Woodstock generation knew about defeating The Legend of Zelda. Rap rock begat sport rock which begat the vacuum that created the White Stripes, a much needed innoculation against the posturing idiocy of honkies with backward Giants caps and a strange penchant for grabbing their balls when singing that “the reason is you”.

… no amount of time will ever erase those moments when we knew, or at least thought, that we were truly originals in a maze of constructed boobs who followed the trends that proved to lead to nothing more than a version of living that their parents perfected a generation ago.

Whew! Heady stuff. I’m grateful one of us can rally for some righteous nostalgia. But damn, I’d prefer to be schooled in person.

Two more salvos for my solipsistic scrapbook (outtakes from August in Oregon and September in Virginia) are in the can. But first a trip to Iowa for the annual reunion of the Marine Corps Second Battallion, heroes of Saipan, Tulagi and Iwo Jima in WWII. I’ll be MC’ing and KJ’ing. WTF.

10 YEARS AGO CRAZY KARL WAS DELIVERED TO ME IN A PAPER BAG. He had no front claws and only one fang, leaving him defenseless on the farm where he grew up. After losing one too many scraps, he needed a home and I obliged.

He was named for his crazy face splotches, but Karl’s moniker proved to be more than skin deep. You’d pet him calmly and suddenly WHAM he’d chomp you, twisting his neck to really lay in with his uni-fang. To those who love cats unconditionally, he was “playful.” To everyone else (me included), he was mean and dangerous. My sister was appalled that we kept him. We told kids to stay the hell away.

In June Karl started yowling at all hours. It was like an extension of his impressive hairball retching—gross and startlingly loud. His cry sounded human enough that Sarah and I sometimes replied, thinking the other was talking. Was Karl expressing pain? Joy? Existential angst? Whatever it was, it was then we began to talk openly about his demise.

Growing up, our pets didn’t die, they were kicked out. My dog Wrigley was wild and untrainable, and so poorly cared for that I decided he’d be better off at the rescue shelter. Instead of talking as promised, our parrot squawked disruptively day and night until one day we gave him away. As soon as a cat peed on my mom’s carpet, it was history.

Why did Karl go the distance? I wish I could say it was our strong emotional bond. But it was more like respect. Karl refused to be the cat people expected. He kept you on your toes. After he stopped cleaning himself (“negligent groomer,” the vets called him), he was like a grizzled old punk. “I live, but not for you,” he seemed to say.

Last week we got a call around 1:00 AM. Karl had been found injured and unable to walk. He was dispatched from the land of the living with an overdose of anesthetic at a St. Paul emergency clinic. Sarah was sad; I experienced mostly relief and guilt. Had we wished for this? Was Karl listening to us? Sarah said she thought it was intentional, like he was chasing one final hurrah. It’s a pleasing thought.

I continue to glimpse Karl out of the corner of my eye. For the first time in a while, I’m not annoyed to see him.

JOHANNA’S PORTFOLIO OF WORKS ON PAPER is getting huge. To this unbiased critic, her style gets more fascinating by the week. Click to go big. 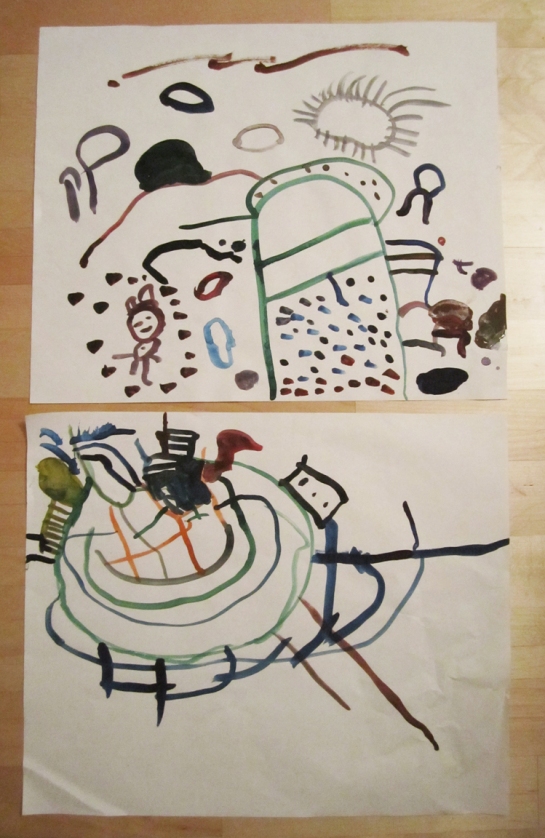 There are full-on worlds within these, which she’ll happily take you through.

Drawings of People Drawing is a popular sub-genre here.

Another: Drawings Cut Apart and Glued to Other Drawings With a Mixed-media Option.

Letters are just now transforming from cryptic talismans of the adult world into something meaningful.

Jo used to whip all paints to a brown pulp. But now we’re getting how to keep light colors pure, and how you have to add a lot more yellow to change blue than vice-versa. Jo called the shots on this one while I held the brushes.

Kids In a Movie Theater, a preview of her birthday party later this month. 4 years old! And already talking about getting a place of her own. Some kid.

> Love – She Comes in Colors